» Bacterial fruit blotch can cause yield losses of up to 90% in watermelon.
» The bacterial pathogen is seedborne and can be easily spread in splashing water and through handling of plants.
» Management efforts should include the use of disease free seed, adequate sanitation, and crop rotation.

Bacterial fruit blotch (BFB) is a disease that is relatively new to the U.S., but it has caused significant yield losses in commercial watermelon plantings. BFB is caused by the bacterium Acidovorax citrulli, which was first observed in the U.S. causing a disease on watermelon seedlings in 1965. The fruit blotch phase of the disease was first seen in the U.S. in a commercial watermelon planting in Florida in 1989, and outbreaks of the disease have been sporadic in the U.S. over the past 20 years. The disease is especially problematic because it can be seedborne, is easily spread, and can cause yield losses of up to 90% when severe.

Watermelon is very susceptible to BFB, but other cucurbits, including melon, cucumber, pumpkin, squash, and gourds, are also susceptible and can serve as sources of inoculum for epidemics on watermelon.1 The pathogen is seedborne, and symptoms on seedlings can be observed as soon as five to eight days after planting. These symptoms include water-soaking on the undersides of cotyledons (seed leaves) and, occasionally, seedling collapse. Infected seedlings serve as a source of inoculum for leaf and fruit infections that develop later in the season.

On mature leaves, symptoms of BFB include dark, reddish-brown lesions that form along the veins of the leaf. These lesions can be hard to see, and they may look similar to lesions caused by other foliar diseases. Infection of the leaf tissues probably does not have much of a direct impact on yield, but it does provide inoculum that can infect the fruit.

Fruit can become infected with BFB during pollination or during the period two to three weeks after pollination, but as the fruit matures, it develops a waxy layer on its surface that inhibits further infection. Symptoms on the fruit typically develop just prior to harvest maturity, first appearing as small, olive-colored, irregular shaped lesions on the upper side of the fruit. These lesions can rapidly expand and grow together, coalescing into a large dark-green stain (or blotch) on the fruit.2 The lesions are initially superficial, not penetrating into the flesh of the melon. 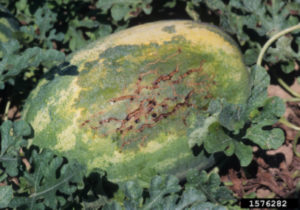 As the disease progresses, cracks form in the lesion area, and an amber-colored liquid oozes out of the tissue. These cracks allow other secondary pathogens to get inside the fruit and rot the fruit from within.

The bacterium that causes BFB survives on and in seed from infected fruit, in infested plant debris in the soil, and on infected cucurbitaceous weeds and volunteer plants. Of these, infected seed is thought to be the most important for initiating disease outbreaks. The bacterium spreads from plant to plant in splashing water (rain or overhead irrigation), on the hands and clothing of workers, and on tools and equipment.1

Infection and disease development is favored by high temperatures (above 90 °F) and high relative humidity levels (above 70%). Thus, the disease is not as prevalent in drier growing regions, such as California.3 The pathogen can live on the surface of seedlings growing in the greenhouse without causing symptoms, but then cause infection once the plants have been transplanted into the field.

Management of BFB should include a combination of preventing the introduction of the pathogen, sanitation to eliminate any inoculum present, and the use of bactericides if the disease appears. There are no commercially available watermelon cultivars that are resistant to bacterial fruit blotch, but there is some variation in susceptibility among cultivars.

The pathogen can be seedborne, so growers should only use seed that has been tested for the presence of the pathogen by a reputable testing facility. At this time, even tested seed-lots cannot be guaranteed as disease free, but use of seed that has tested negative for the pathogen significantly reduces the risk of a disease outbreak. Seed also can receive hot water or chemical treatments, but currently no seed treatments have been shown to be 100% effective.4

Because they are handled more and produced in warm, moist environments, watermelon transplants are more likely to be infected with the BFB pathogen than are direct seeded plants. However, with the increased popularity of seedless varieties, for which seed is more expensive, the use of transplants in watermelon production is increasing. Grafting onto rootstocks is also becoming more common, and this also increases the risk of infection because the wounding and increased handling increases the changes of infection.

Seedlings should be regularly inspected for symptoms of BFB, both in the greenhouse and in the field after transplanting. Seedlings showing symptoms should not be transplanted, and it is recommended that all seedlings from a seed-lot that produced infected plants should be destroyed.

Cucurbitaceous weeds and volunteer plants (watermelon, melon, cucumber, etc.) should be removed from areas in and around transplant houses and production fields. Fields with infested plant debris should be deep plowed to bury the debris, and a three year rotation with non-cucurbitaceous crops should be initiated.

If the disease is detected in the field, applications of copper-based bactericides, such as cupric hydroxide, copper hydroxosulfate, or copper oxychloride, can help slow the spread of the disease and protect fruit from infection. Applications should start at or before flowering and continue until fruit are mature. Any equipment used in a field containing plants infected with BFB should be thoroughly cleaned before use in another watermelon planting.1,2

Individual results may vary, and performance may vary from location to location and from year to year. The information provided in this communication may not be an indicator of results you may obtain as local growing, soil and weather conditions may vary. Growers should evaluate data from multiple locations and years whenever possible. ALWAYS READ AND FOLLOW PESTICIDE LABEL DIRECTIONS. The recommendations in this article are based upon information obtained from the cited sources and should be used as a quick reference for information about watermelon and bacterial fruit blotch. The content of this article should not be substituted for the professional opinion of a producer, grower, agronomist, pathologist and similar professional dealing with these crops.

SEMINIS DOES NOT WARRANT THE ACCURACY OF ANY INFORMATION OR TECHNICAL ADVICE PROVIDED HEREIN AND DISCLAIMS ALL LIABILITY FOR ANY CLAIM INVOLVING SUCH INFORMATION OR ADVICE. 160330084311 DME051816