Leaf streak and the associated bulb rot has been problematic in onion growing areas in the southeastern U.S., especially along the Gulf coast, as well as in Colorado and Texas. Initial symptoms are oval, water-soaked lesions on the leaves, tip burn, or streaks on the leaves. The streaks are initially dark green and water-soaked, becoming  brown to black with age (Figure 1). The streaks spread down the leaves, and eventually whole leaves collapse, dry up, and fall off. Some leaves become distorted and twisted. Infected bulbs develop dark spots on the wrapper scales, and red discoloration appears on some inner scales. The discoloration and eventual rot remain restricted to certain scales. Thus, the symptoms appear in a ring-like pattern within the bulb.1,2 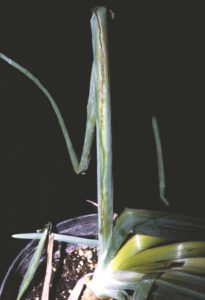 The leaf streak pathogen has a wide host range, infecting bean, brassicas, cucumber, grape, lettuce, pepper, and tomato. In areas of the southeast, the bacterium can overwinter as an epiphyte (grows on the surface) of a number of weed species. The bacterium does not survive well in the soil. The disease is most damaging in mild to cool conditions, in the winter in southern growing areas. Disease spread and development are favored by prolonged periods of rain and excessive fertilizer (nitrogen) applications. Frost may predispose plants to infection.1,2

Center rot is a relatively new disease of onion in North America, first reported in Georgia in 2006. It has since caused significant yield losses in areas such as Michigan.3 The disease starts on the center leaves as small, dry, white lesions. These lesions expand and spread into the neck, resulting in leaf wilt and dieback. The pathogen then moves into the bulb, causing light brown to reddish discoloration of the scales (Figure 2).2,4 Secondary infections rot the interior of the bulb, and foul odors can be produced. 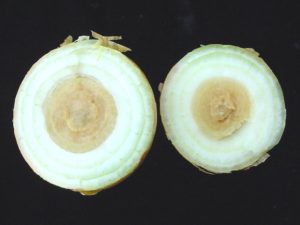 The development of center rot is favored by warm, humid conditions during bulb initiation. The pathogen is spread by splashing water and thrips. The bacterium overwinters on seed and on alternate host plants, often as an epiphyte.

Soft rots of bulbs are caused by several different bacterial pathogens. Soft rots can start in the field, mostly on mature bulbs, or once bulbs are in storage. Field infections usually start on leaves at the base of the plant near the soil line. Affected tissues become water-soaked and mushy. The rot progresses through the neck into the bulb, and internal scales become water-soaked. Depending on the pathogen, the scales show a yellow-brown or bleached-gray discoloration. Watery rot develops on the fleshy scales (Figure 3), and the core can fill with a foul smelling liquid.1,2

Soft rots usually develop after a heavy rain or irrigation with contaminated irrigation water late in the season. Infection is favored by warm (65-85°F), humid conditions, and the bacteria are spread by splashing or running water and insects, such as the onion maggot. Rotting can continue on bulbs in storage at temperatures as low as 37°F. The pathogens overwinter on infested crop debris and in the soil. Infection often occurs through wounds on the bulb. 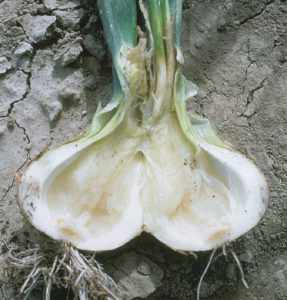 Both slippery skin and sour skin occur on bulbs late in the season. Slippery skin starts with water-soaking and discoloration of one or two inner scales. Except for a softening of the neck, no external symptoms may show on affected bulbs. Rot develops from the top of the bulb downward, eventually affecting the entire interior of the bulb. With time the internal bulb tissues dry out and shrivel (Figure 4a). 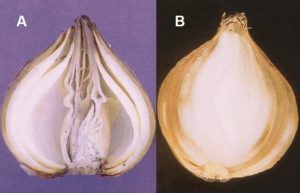 Figure 4. Internal symptoms of (A) slippery skin and (B) sour skin.

With sour skin, a slimy rot with light yellow to brown discoloration develops on a few inner scales (Figure 4b). Affected bulbs may show no external symptoms. The necks soften after the leaves collapse.

Both slippery skin and sour skin develop when the bacterial pathogens infect through wounds on maturing bulbs just before harvest.

There is variation in varietal susceptibility to some of these diseases. For bacterial soft rots, slippery skin and sour skin, growers should look for varieties with small, tight necks and erect tops to minimize the amount of water that can get into the neck. Timely incorporation of infested crop debris and crop rotations of two to three years will help lower pathogen populations in the field. Avoid planting alternate host crops, such as beans, corn, alfalfa, and tomato, in the rotations. Eliminate volunteer onions, and manage weed species that may serve as reservoir hosts.

Avoid overhead irrigation and avoid using irrigation water that may be contaminated with the pathogens, especially late in the season. Planting at higher densities results in smaller necks that dry faster and are less prone to disease. Avoid excessive fertilization, especially nitrogen. Stop fertilizer applications early to allow the bulbs to mature. Avoid bruising and wounding the bulbs.

Applications of copper-based bactericides mixed with an EBDC fungicide, such as mancozeb, can help slow infection and disease spread. Applications should begin two weeks before bulb initiation and continue at five to 7 day intervals until harvest.

Harvest recommendations will vary among regions. Long-day onions grown in arid regions should be undercut after 50-70% of the tops have lodged and allowed to field cure for about two weeks before harvest. Adequate field curing significantly reduces the moisture trapped in the neck of the bulb as well as the outer false scales, which can be opportunistic places for bacteria to grow. Short day onions may be undercut closer to when 90% of the tops have lodged, and they should be field cured for only one to two days before harvest in order to avoid sun damage. Bacterial infections can follow any sort of physical damage, including sun scorch. Discard diseased bulbs before putting into storage, and cure bulbs with adequate ventilation, reducing storage temps slowly to holding temperatures of 32-36°F.

Individual results may vary, and performance may vary from location to location and from year to year. The information provided in this communication may not be an indicator of results you may obtain as local growing, soil and weather conditions may vary. Growers should evaluate data from multiple locations and years whenever possible. ALWAYS READ AND FOLLOW PESTICIDE LABEL DIRECTIONS. The recommendations in this article are based upon information obtained from the cited sources and should be used as a quick reference for information about onion diseases. The content of this article should not be substituted for the professional opinion of a producer, grower, agronomist, pathologist and similar professional dealing with this specific crop.

SEMINIS DOES NOT WARRANT THE ACCURACY OF ANY INFORMATION OR TECHNICAL ADVICE PROVIDED HEREIN AND DISCLAIMS ALL LIABILITY FOR ANY CLAIM INVOLVING SUCH INFORMATION OR ADVICE. 161028160750 042417DME