» Alternatives to traditional pesticides can be included in programs to manage vegetable pests.
» Trap crops and natural enemies are two options for insect and mite management.
» Populations of natural enemies can be enhanced through habitat manipulation and the release of commercially raised biocontrol agents.

Insect and mite pests can damage vegetable crops directly as a result of feeding damage and indirectly as a result of transmitting viral pathogens. While synthetic pesticides are available to manage many of these problems, alternative management strategies are available to help reduce or eliminate the use of these pesticides. Alternative strategies often work best when used as part of an integrated pest management (IPM) approach. 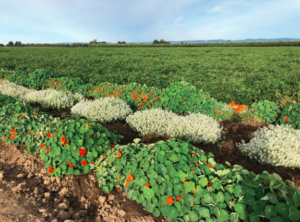 Figure 1. Sweet alyssum and nasturtium can be planted near tomatoes to act as trap crops for thrips and other pests.

An example of a trap crop system is the planting of Blue Hubbard squash near other cucurbit crops such as melon, cucumber, summer squash, and watermelon. Blue Hubbard squash produce high amounts of the chemical cucurbitacin, which is very attractive to striped and spotted cucumber beetles and squash bugs. For the best results, the Blue Hubbard plants need to be larger than the production crop plants.3 The cucumber beetles that are attracted to the Blue Hubbard plants need to be killed using physical methods (hand picking, vacuuming, or flaming), with the use of organic approved insecticides such as spinosad or pyrethrincontaining products, or with the use of conventional synthetic insecticides (applied only to the trap crop).2

Other trap crop systems include the use of marigolds to attract thrips in pepper plantings and bush beans to attract spider mites in tomato plantings.1 Sweet alyssum and nasturtium can be planted near sweet corn and tomatoes (Figure 1) to attract thrips, and collards can be used to attract diamondback moths, cabbage loopers, cabbage aphids away from other brassica crops such as broccoli, cabbage, and cauliflower.

Braconid, Ichneumonid, and Trichogramma wasps are examples of parasitoids that lay eggs in insects, including caterpillars. When the eggs hatch, the wasp larvae eat the caterpillars from the inside. Many types of Tachinid flies are also parasitoids, laying their eggs in grasshoppers, gypsy moth caterpillars, Colorado potato beetle larvae, Japanese beetles, squash bugs, and stink bugs.1,5

Conservation biological control focuses on enhancing the activity of the natural enemies that are already present. Enhancement involves efforts to improve the longevity, reproduction, and effectiveness of natural enemies and by reducing factors that harm or suppress their populations and activities.4 Providing sources of water, alternative food, overwintering sites, and wind protection can increase the numbers of natural enemies and their activities.6 Providing an overlapping mix of flowering plants during the season provides food in the form of pollen and nectar. Plants that host alternate, non-pest prey species also provide food sources to sustain natural enemies.1 Plants such as fennel, coriander, dill, and wild carrot, are good sources of nectar and suitable habitats for parasitoid wasps.6 Legume ground covers also provide flower and prey food sources. Windbreaks, hedgerows, and vegetation strips provide habitats during the season and can serve as sites of overwintering. Plant-based mulches can provide hiding places for ground and soil-dwelling predators.4,6

Reducing the exposure of natural enemies to pesticides that can harm them is an important aspect of increasing their presence and activity. Using low impact insecticides such as spinosad, indoxocarb, and pyriproxyfen, plant extracts (horticultural oils), and insecticidal soaps can help protect natural enemies. Applying pesticides during periods of low activity of beneficial insects, the use of enclosed bates, and spot treatments can also minimize the exposure to and impact of pesticides. Biological products, including Bt products, insect infecting fungi such as Beauveria bassiana, and insect infecting viruses (nuclear polyhedrosis viruses, granulois viruses) can also help protect populations of natural enemies.1,4,6,7

The process of augmentation involves the release of natural enemies in high numbers when they do not thrive in an environment or at times when they are not normally active (Figure 2).4 There are several factors to consider when designing an augmentation program. The target pests and the natural enemies that can manage them should be clearly identified. The proper application timing should be determined, based on the life cycles of the pests and their natural enemies, and the recommended release rates and frequencies should be understood.4 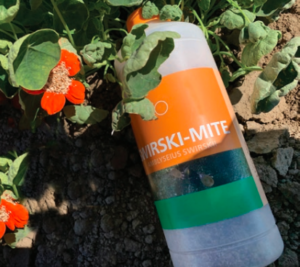 Figure 2. The release of swirski mites in a nasturtium trap crop for thrips management.

Inoculation is the process of releasing natural enemies at critical times during the season with the intent of augmenting natural populations. Inundation is the process of releasing large numbers of natural enemies that may not become established. Inundation is often used for spot treatment of hotspots in the field. An example is the release of 5,000 to 200,000 Trichogramma wasps per acre to manage European corn borer on sweet corn and peppers.1,6

For additional agronomic information, please contact your local seed representative.
Performance may vary from location to location and from year to year, as local growing, soil and weather conditions may vary. Growers should evaluate data from multiple locations and years whenever possible and should consider the impacts of these conditions on the grower’s fields. The recommendations in this article are based upon information obtained from the cited sources and should be used as a quick reference for information about vegetable production.
The content of this article should not be substituted for the professional opinion of a producer, grower, agronomist, entomologist and similar professional dealing with vegetable crops.
BAYER GROUP DOES NOT WARRANT THE ACCURACY OF ANY INFORMATION OR TECHNICAL ADVICE PROVIDED HEREIN AND DISCLAIMS ALL LIABILITY FOR ANY CLAIM INVOLVING SUCH INFORMATION OR ADVICE.
9050_SE_S6 Published 11/04/2020