» Anthracnose, Phytophthora fruit rot, and root-knot are three diseases that can significantly impact cucumber production.
» Hybrid cucumbers are resistant to some races of the anthracnose pathogen, but there are no varieties with resistance to Phytophthora fruit rot or root-knot nematodes.
» The integration of cultural practices and chemical applications are important for the management of all three diseases.

Anthracnose symptoms on cucumber include lesions that can develop on seedlings, leaves, petioles, vines, and fruit. Leaf lesions start as yellow, water-soaked spots. The circular spots enlarge up to 1⁄2 inch in diameter. The spots turn brown, and the centers can crack and drop out giving the leaves a shot-holed appearance (Figure 1A). Lesions on the fruit are circular, sunken, and covered with masses of salmon-pink spores during moist conditions (Figure 1B).1,2

Colletotrichum orbiculare, the fungus that causes anthracnose on cucumber, survives on infested plant residues and volunteer host plants. The pathogen also can be seedborne. Spores of the fungus are dispersed by splashing water, wind, and on contaminated tools and worker’s clothing. Several days of rainy weather with moderate (72 to 81 °F) temperatures are needed for the disease to develop, and a 24-hour period of 100% humidity is needed for spore germination and infection to take place.1

Anthracnose is best managed by a combination of host resistance, cultural practices, and fungicides. Hybrid cucumbers are resistant to races 2 and 2b but susceptible to race 1 of the pathogen. Inoculum levels of the pathogen in the field can be reduced by prompt plow-down of crop residue after harvest and a minimum two-year rotation to non-cucurbit crops.3,4 If possible, avoid using overhead irrigation, as splashing water can spread the disease.2 Scout fields for anthracnose when plants begin to flower, and begin fungicide applications at the first sign of disease.3 A number of fungicide products are available to control anthracnose on cucumbers, with Qoi (strobilurin) fungicides generally more effective than DMI fungicides.1

Phytophthora fruit rot is one phase of Phytophthora blight, a disease caused by the pathogen Phytophthora capsici. Other phases of the disease include crown and root rots. The fruit rot phase occurs primarily in areas with humid climates, such as the eastern and Midwestern U. S.5

Water-soaked spots appear on the fruit, beginning on the parts of the fruit in contact with the soil. Spots can also appear on upper fruit surfaces following periods of splashing rain or sprinkler irrigation.1 The spots become soft, and a white growth, resembling powdered sugar, develops on the fruit surface (Figure 2).6 This growth is made up of masses of spore-like bodies called sporangia, and the growth can quickly cover the fruit, leading to fruit collapse.1,5,6 Fruit can be infected but asymptomatic at harvest, with the rot developing during transit or storage.7 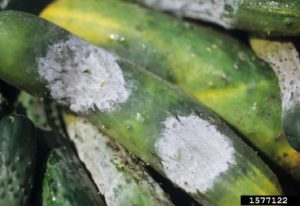 Phytophthora capsici can survive as thick-walled spores in the soil for at least two years. It can also survive on infested crop debris and on the roots of volunteer plants and weeds.1 Phytophthora fruit rot is favored by wet soils, as spores are formed and released when soils are near saturation.1,5 The pathogen is able to infect all cucurbits, as well as peppers, eggplant, tomatoes, snap beans, and several weed species, including nightshade, purslane, and velvetleaf.5,6

Management of Phytophthora fruit rot requires the integration of cultural practices and fungicide applications. Avoid fields with a history of the disease. Plant in well- drained locations, and avoid low-lying areas. Subsoil-till to increase soil drainage and plant on dome-shaped raised beds (for bushy varieties).5 Increased row spacing promotes rapid drying of foliage and allows for better coverage of fungicides.7 Drip irrigation is preferred to overhead irrigation, especially during the fruiting period, to reduce disease spread. Water from ponds and creeks should not be used for irrigation, as it can contain spores of the pathogen.5,6,7 Preventing the root and crown rot phase early in the season will reduce the incidence of the fruit rot phase later on.1 Clean equipment and tools between fields to prevent the spread of the pathogen, and never dump culled fruit or plants in production fields.5,6 Rotate to non-host crops for two or more years, and control weed hosts.

The above ground indications of root-knot are patches of stunted and chlorotic plants. The number and size of leaves will be reduced as will fruit quality and yield. These plants can wilt during periods of warm weather, and infected plants may die before producing fruit. Galls (swellings) develop on the roots of affected plants, and root systems become necrotic with few feeder roots (Figure 3). Root knot is typically more severe in areas with light, sandy soils.1 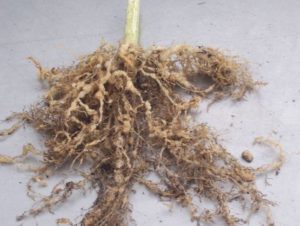 Root-knot nematodes have a wide host range, infecting more than 2000 plant species. Therefore, crop rotation is not usually an effective management strategy. However, rotation to grain crops sometimes can help lower nematode populations.1,4 There are no cultivars of cucumber with resistance to root-knot. The management of root-knot often involves the use of soil fumigants or nematicides. Pre-plant soil fumigants effective against root-knot include 1-3 dichloropropene (Telone® II Soil Fumigant) and metam sodium (Vapam® HL Soil Fumigant). These fumigants are applied to the soil under plastic tarps several weeks before planting. Non-fumigant nematicides used against root knot include fluensulfone (Nimitz® Nematicide), fluopyram (Velum® Prime), and oxamyl (DuPontTM Vydate®L Insecticide/Nematicide). Fluensulfone is applied to the soil at least seven days before planting, while fluopyram is applied during the season through drip irrigation. Oxamyl can be applied to the soil pre-plant or at planting, as well as a foliar application two to four weeks after planting.3,4

The biocontrol agent Paecilomyces lilacinus strain 251 (MoloCon® WG Biological Nematicide) can help manage root -knot nematodes. It is applied to the soil at least 14 days before planting when 4-inch soil temperatures are at least 60 °F. Subsequent applications at or after planting can be made through drip irrigation systems or as banded sprays over the seed furrow or row. This control method is approved for organic production systems.3

Performance may vary from location to location and from year to year as local growing, soil and weather conditions may vary. Growers should evaluate data from multiple locations and years whenever possible and should consider the impacts of these conditions on the grower’s fields. ALWAYS READ AND FOLLOW PESTICIDE LABEL DIRECTIONS. The recommendations in this article are based upon information obtained from the cited sources and should be used as a quick reference for information about cucumber diseases. The content of this article should not be substituted for the professional opinion of a producer, grower, agronomist, pathologist and similar professional dealing with this specific crop.

SEMINIS DOES NOT WARRANT THE ACCURACY OF ANY INFORMATION OR TECHNICAL ADVICE PROVIDED HEREIN AND DISCLAIMS ALL LIABILITY FOR ANY CLAIM INVOLVING SUCH INFORMATION OR ADVICE. 180118105326  042018DME