Plants have inducible mechanisms of resistance that can be triggered by factors including infection by pathogens, the presence of non-pathogenic microorganisms, and the application of certain chemicals such as salicylic acid. In some cases, inducing resistance in one part of the plant can result in resistance developing systemically in other parts of the plant, a phenomenon known as systemic acquired resistance (SAR).1,2 SAR is defined as “a state of enhanced defensive capacity elicited by specific environmental stimuli.”2 The resistance reaction is expressed in the vicinity of infection as well as in more distant parts of the plant (Figure 1).3 Salicylic acid molecules spread throughout the plant and signal the need for defense reactions. The resulting resistance can be effective against many kinds of pathogens including bacteria, fungi, nematodes, and viruses, and the resistance can remain effective for several weeks.3,4 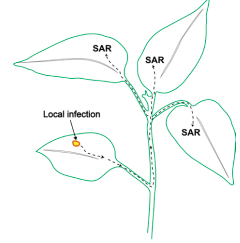 Figure 1. Systemic acquired resistance (SAR) involves the systemic translocation of chemicals that prime or trigger defense mechanisms in the plant.

SAR does not usually affect the germination of pathogen spores, as some fungicides do. Rather, the processes of pathogen penetration and infection of plant tissues are inhibited. One way this is accomplished is through the lignification of plant cell walls at the site of attempted penetration. SAR triggered cells can also inhibit the movement of nutrients across cell membranes, which can “starve the pathogen”.4 Triggered plant cells can also produce and release compounds that attack the cell walls of fungal pathogens.

SAR responses can be induced by the application of salicylic acid and its functional analogues.5 2,6-dichloro-isonicotinic acid (INA) and benzo (1,2,3) thiadiazole-7-carbothioic acid-Smethyl ester (BTH) are two of the best studied SAR inducing chemicals. BTH has been shown to be the safest and most efficient SAR inducer so far, and it is rapidly transported to the apical leaves. BTH provides protection against some bacteria and biotrophic fungal pathogens (obligate parasites), such as powdery mildew and rust fungi. It is not as effective against diseases, such as anthracnose, that are caused by necrotrophic pathogens.5 BTH is commercially available in the U.S. as the product Actigard® 50WG Plant Activator.2

Induced systemic resistance (ISR) is a phenomenon that is similar to but distinct from SAR. ISR can be induced in plants by the presence of microorganisms including plant growth promoting rhizobacteria (PGPR) (Figure 2). Several species of bacteria, including species of Pseudomonas, Bacillus, and Streptomyces have been shown to elicit ISR responses in plants, as have some kinds of fungi. Unlike SAR reactions, ISR reactions do not depend on salicylic acid for triggering the defense response. Other plant chemicals, including jasmonate and ethylene, are involved in the ISR associated defense resonses.2,5 Similar to SAR elicitors, ISR elicitors activate or prime (preactivate) plant defense mechanisms that are more rapidly triggered to protect against infection. 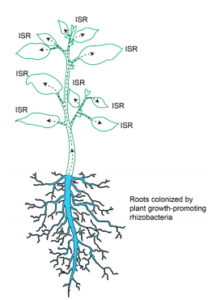 Figure 1. Systemic acquired resistance (SAR) involves the systemic translocation of chemicals that prime or trigger defense mechanisms in the plant.

The QST 713 strain of Bacillus subtilis, a bacterium, is available as the commercial products Serenade® ASO and Serenade® Opti.2 Another type of bacteria, Streptomyces lydicus WYEC 108 has also been developed as a commercial ISR inducing product named Actinovate®. ISR responses were initially found to be associated with the colonization of roots by the ISR eliciting microorganisms. However, some of these products can also elicit the ISR response when applied as a foliar spray. Application options of soil drench, chemigation, and foliar sprays are indicated on some of the product labels. For example, with the use of Serenade® ASO on brassicas, foliar applications are included on the label for foliar diseases such as Alternaria leaf spot, anthracnose, bacterial leaf spot, downy mildew and several others. Soil applications are recommended for soilborne diseases/pathogens such as club root and diseases caused by speicies of Fusarium, Macrophomina, Pythium, Rhizoctonia, and Verticillium. In addition to eliciting the ISR response, Bacillus subtilis QST 713, the bacterium in Serenade® products, also produces a number of antimicrobial substances that inhibit spore germination and the growth of fungal pathogens.6

Both SAR and ISR products have been and continue to be evaluated in field settings. In some studies, the level of control was found to be as good or better than that resulting from treatment with traditional products. In other cases, the levels of disease protection were not as good those seen with the use of traditional fungicides and bactericides.5 Efficacy can be affected by the base level of resistance of the plant variety. With SAR products, phytotoxicity was sometimes seen at high
rates of application.

ISR products also have been shown to provide some control of powdery mildew on watermelon.7 As with SAR products, ISR products may not provide the levels of protection seen with traditional fungicides. However, the ISR products can be used as components of integrated disease management programs that include the use of other fungicides and bactericides.

Because both SAR and ISR products induce aspects of the plants defense systems, there can be some tradeoffs between effective disease management and plant productivity or phytotoxicity problems. As the plant shifts some of its resources to the systemic activation of defense mechanisms, fewer resources may be available for plant growth and yield. Reductions in growth or yield are referred to as fitness costs. The proper timing of product application, based on physiological stages of the host plant and favorability of conditions for disease development, can minimize the fitness costs associated with the use of these products.2,5

The rate of application (the dose) of the products will also affect whether the defense mechanisms of the plant are primed (low doses) or induced (high doses). Priming without induction usually results in lower fitness costs.5 It is also possible that plant varieties can be bred to minimize the negative effects of SAR and ISR induction as variability among varieties has been observed in some studies.

Unlike traditional fungicides and bactericides, where regular use can result in the development of resistant strains of pathogens, the regular application of SAR and ISR inducing products does not appear to place selection pressure on the pathogens that would lead to the development of resistance. Both SAR and ISR inducing products can be used along with traditional fungicides and bactericides in integrated disease management programs.2

For additional agronomic information, please contact your local seed
representative.
Performance may vary, from location to location and from year to year, as local growing, soil and weather conditions may vary. Growers should evaluate data from multiple locations and years whenever possible and should consider the impacts of these conditions on the grower’s fields. The recommendations in this article are based upon information obtained from the cited sources and should be used as a quick reference for information about vegetable production. The content of this article should not be substituted for the professional opinion of a producer, grower, agronomist, pathologist and similar professional dealing with this specific crop.
ALWAYS READ AND FOLLOW PESTICIDE LABEL DIRECTIONS. Not all products are registered in all states and may be subject to use restrictions. The distribution, sale, or use of an unregistered pesticide is a violation of federal and/or state law and is strictly prohibited.
Check with your local dealer or representative for the product registration status in your state.

BAYER GROUP DOES NOT WARRANT THE ACCURACY OF ANY INFORMATION OR TECHNICAL ADVICE PROVIDED HEREIN AND DISCLAIMS ALL LIABILITY FOR ANY CLAIM INVOLVING SUCH INFORMATION OR ADVICE.
9050_SE_S9 Published 02-02-2021

ALWAYS READ AND FOLLOW PESTICIDE LABEL DIRECTIONS. Not all products are registered in all states and may be subject to use restrictions. The distribution, sale, or use of an unregistered pesticide is a violation of federal and/or state law and is strictly prohibited. Check with your local dealer or representative for the product registration status in your state. Bayer, Bayer Cross, Seminis® and Serenade® are registered trademarks of Bayer Group. All other trademarks are the property of their respective owners. For additional product information call toll-free 1-866-99-BAYER (1-866-992-2937) or visit our website at www.BayerCropScience.us.