» Newer varieties of seedless watermelons can be planted by direct-seeding.
» Soil temperatures at or above 75°F are needed to obtain acceptable plant stands.
» Direct-seeded plantings can produce as well as transplanted plantings under certain conditions.

Direct-seeding has been the standard method of planting seeded (diploid) watermelon varieties for many years. Because of the relatively low cost of the seed, growers can plant more seed than needed and thin the planting after emergence for the desired plant stand. When seedless (triploid) watermelon varieties became popular in the early 1990s, the seed was much more expensive because it is more difficult to produce. At that time the triploid seed also had lower germination rates than diploid seed, and optimal greenhouse conditions were needed to obtain germination rates of 70 to 80%. Germination rates in the field were even lower. As a result, the practice of over-seeding and thinning was not economically feasible with triploid varieties, and seedless watermelons have since been planted primarily by transplanting rather than direct-seeding to keep costs down.1

In addition to reducing the number of seed required, there are other advantages to transplanting, especially for early-season production. For direct-seeding watermelons, soil temperatures should be above 75°F, but when using transplants, seedlings can be started in the greenhouse when soil conditions in the field are too cold for planting.2,3 Planting four- to six-weekold seedlings can result in earlier harvests and increased yields under some conditions, and the more precise stand establishment can result in more uniform fruit size.

The disadvantages of transplanting include the extra costs of producing seedlings and transplanting and the amount of labor needed for transplanting.2 Transplanting can result in transplant shock, where plants need a week or more to recover and begin growing after transplanting. Seedlings that are started in 128-cell trays usually have a compacted root ball at the time of transplanting, rather than the dominant tap root system that develops on direct-seeded plants.4 The root systems on transplanted watermelons tend to be more fibrous and concentrated in the upper six to twelve inches of the soil, especially early in the season.2,4

Over the past 30-plus years, there have been substantial improvements in the germination rates of triploid watermelon varieties. Germination rates of newer varieties can be as high as 95 to 99% in the greenhouse and 90 to 95% in the field under favorable conditions. This means that direct-seeding of seedless varieties is now feasible in some circumstances. The primary constraint is that soil temperatures need to be at or above 75°F at the time of planting. It has been shown that in plantings of similarly aged plants (planting seeds in the greenhouse and the field at the same time), direct-seeded crops can produce higher numbers and total weights of fruit earlier in the season than transplanted crops under some conditions.4 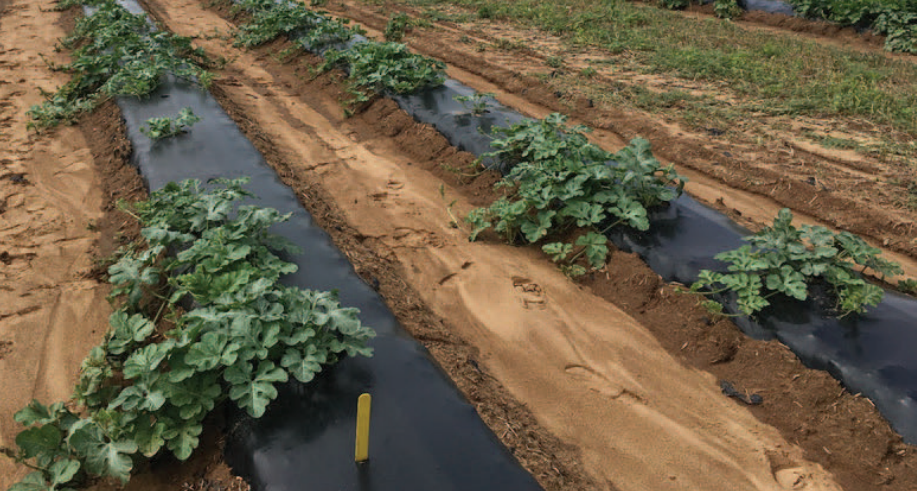 With the newer triploid varieties, direct seeding can lower the costs of planting and reduce the need for the labor required for transplanting. With no transplant shock, direct-seeded plants can develop more quickly and reach the harvest stage earlier in some circumstances. The direct-seeded plants also have a larger tap root that grows deeper into the soil early in the season.4

Direct seeding is usually done on bare-ground; however, direct seeding watermelon can also be done with plastic mulch, raised-bed systems (Figure 1). To accomplish this, holes need to be cut in the plastic at the desired spacing. Devices for creating holes in the plastic can be mounted on the planter, just ahead of the equipment that places the seed in the hole. With small acreage operations, seed can also be planted by hand. The increased soil temperatures under the plastic mulch can help maximize germination rates of the triploid seed. A study with two triploid varieties direct-seeded into black plastic mulched raised beds showed that good plant stands can be achieved in these situations (Table 1). 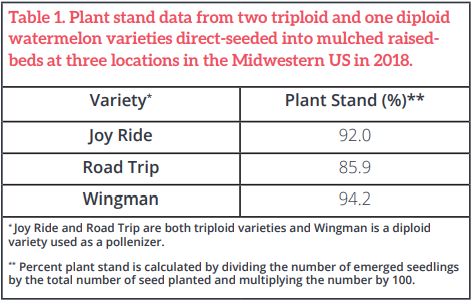 Plant stand data from two triploid and one diploid watermelon varieties direct-seeded into mulched raisedbeds at three locations in the Midwestern US in 2018.

Using seed that has been primed and treated can provide an added advantage for obtaining optimal stand establishment. Seed priming is a process of soaking seed in a solution prior to planting in order to improve the rate of seed germination, the percent germination, and the uniformity of seedling emergence.5 However, priming can shorten the shelf-life of the seed, so it should be done within six to twelve months of planting.

Seed treatment products are applied to the seed to protect seeds and seedlings from insect pests and pathogens that may be carried on the seed or present in the soil. Both priming and treating triploid watermelon seed can help ensure adequate plant stands when planted by direct seeding.

Performance may vary from location to location and from year to year, as local growing, soil and weather conditions may vary. Growers should evaluate data from multiple locations and years whenever possible and should consider the impacts of these conditions on the grower’s fields. The recommendations in this article are based upon information obtained from the cited sources and should be used as a quick reference for information about watermelon production. The content of this article should not be substituted for the professional opinion of a producer, grower, agronomist, pathologist and similar professional dealing with this specific crop.

SEMINIS VEGETABLE SEEDS, INC. DOES NOT WARRANT THE ACCURACY OF ANY INFORMATION OR TECHNICAL ADVICE PROVIDED HEREIN AND DISCLAIMS ALL LIABILITY FOR ANY CLAIM INVOLVING SUCH INFORMATION OR ADVICE. 3070_SE_S1